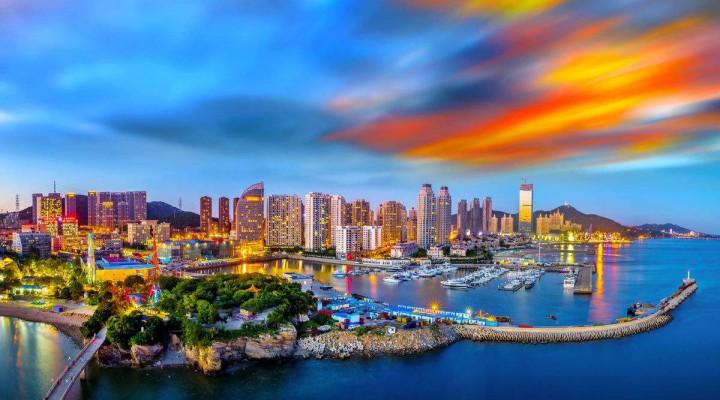 Located on the southern tip of the eastern Liaoning peninsula Dalian has a superb geographical location and serves as a gateway to Beijing and Tianjin. Dalian has the Yellow Sea on its east, the Bohai Sea on its west, Liaoning, Jilin and Heilongjiang, the three provinces of Northeastern China and part of Inner Mongolia Autonomous Region on its north. This ideal location, agreeable climate and beautiful scenery enabled Dalian to become an important center of international shipping, finance, business, tourism and information in northern China. Dalian is a city privileged with a provincial economic administration.Dalian is an important hub of communications in northern China and an important international shipping center in northeast Asia. It is a hub of a comprehensive transportation system with a powerful capacity either through the sea, land or air. The Dalian Port is a world renowned deep and ice free harbor, having shipping relations with over 160 countries and regions and undertaking more than 70% of cargo transportation and 90% of containerized traffic. Dalian is an important foreign trade port in the northern China and the largest goods transfer port in northeast China. Dalian International Airport has opened nearly 100 domestic and international air routes and has been the largest airfreight transport base in northeast China. Dalian is linked with a well developed highway and railway networks. In the city proper there are many convenient public transportation lines with light rails, street cars and buses.

As an important industrial base of China, Dalian has all categories of industries capable of manufacturing a massive array of equipment. Dalian is the building base of large ships and maritime projects in China. Its shipbuilding industry accounts for one-third of the total industry in China. Dalian is the manufacture and export base of the machinery manufacturing industry. Its inner-power combustion locomotives, machine tools and tires, refrigeration machinery, bearings, and diesel engines are world famous. In addition, Dalian is the manufacture and export base of digitalized audio-visual products. Dalian is also the base of petroleum refining and a city of the internationalized software industry. Dalian DD Port is the industrial base to develop biological engineering and digitalized technology. Its specialized industrial parks including the digitalized manufacturing park, the biological engineering park and the pharmaceutical industrial park. They displayed the industries aggregative effect and have expanded the industrial scale. Such noted companies as Dalian Zhen ‘Ao Company is developing beyond imagination in the industrial parks.

Dalian has an integrated and ideal science and technology education and vocation training system and is rich in science and technology human resources. There are 21 universities and colleges with 120,000 undergraduates, over 10,000 in-school doctors and postgraduates, 18 state academicians of natural science and engineering, 260,000 scientific research personnel and over 1,000,000, high-qualified industrial workers. Dalian University of Technology, Dalian Maritime University, Northeast Finance and Economy University, Dalian University of Foreign Languages, and Dalian Medical University are all well-known universities in China. The Maritime Training Center of the United Nations Asia Development Office has a cooperative relationship with Dalian Maritime University. Dalian Research Institute of Chemical Physics, Guangming Chemical Research Institute and Maritime Environment Protection Research Institute are all famous research institutes in China.

Dalian is a famous summer resort and one of the tourist destinations of China with its beautiful scenery and pleasant environment. Dalian is an outstanding tourist city in China. The Southern Coast, the Forest Park, Lvshun Port, Golden Pebble Beach and the Bingyu Valley are important and famous provincial or national tourist spots. Many large-scale internationalized events including the annual Dalian International Fashion Festival, Acacia Flowers Festival, Spring Festival of Fireworks, and Dalian Import and Export Commodities Fairs of China attract businesspeople, artists, fashion designers and popular models all over the world to the seaside city of Dalian. Dalian Nature Museum, Lvshun Museum, Dalian Modern Museum and Architectural Arts Museum are already magnets both at home and abroad.

Dalian has such nicknames as the “Soccer City” and “Home of Track and Field”. The Dalian Soccer Team has won champions eight times in the total ten sessions of the Class-A Soccer League of China. The training base for world record-holder of women four-item race is located in Dalian and Wang Junxia, owner of the Owens Award, is a Dalian native. Yan Chen, a Dalian native and a world class female swimmer has set many world records. For many years the international Marathon Race and the World Beach Volleyball Match held in Dalian have been greatly successful.

Dalian is a modernized international shipping metropolis. Shipping is flourishing in Dalian, which is connected with well developed commercial networks. Dalian Shopping Mall and Tianjin Street are traditional shopping centers in China. Dalian is one of the important exhibition centers of China, hosting annually 40 to 50 national and international exhibitions with great success. Dalian is also one of the significant commodity exchange centers of Northern China. At present, Dalian Commodity Exchange is one of the three largest futures exchanges in China and No.1 in Asia and No.2 in the world soybean futures market. The total annual futures trading amounts of the Dalian Northern Grain Exchange Market and the Petrochemical Market in the Dalian Free Trade Zone reaches more than 50 billion RMB respectively.

Dalian is one of the most livable cities in China, which is recognized by the Chinese Central Government as a National Sanitary City, a National City in Environmental Protection, and a National Garden City. The city is the first chosen as the city of environment cooperation with Japan. There are more than 100 city plazas in Dalian with 9.5 square meters public green space per capita. In 2001 Dalian won the title of one of the Global 500 by UNEP.

Dalian continues to enhancing its relations with foreign countries and is a land of friendship. Since 1979 Dalian has established friendly or cooperative relationships with 18 foreign cities, including Kitakyushu in Japan, Houston in the USA, Bremen in Germany, Le Havre in France, and Glasgow in the U.K., to name just a few. State guests from foreign countries and many international celebrities have visited Dalian. Among them are Dr. Boutros Butrous-Ghali, the former Secretary-General of the UN; President Samaranch of the IOC; Dr. Henry Kissinger, the former Secretary of State of the USA; Mr. Boris Yelstin, former President of Russia; and Chancellor Shröeder of Germany.

Dalian is one of the cities with fast economy development in China. In 2003 the rate of Dalian economic development was 15.2% and its GDP reached to 1632.6 billion RMB, and the GDP per capita reached 3,529 US Dollars. Dalian is also a port city in Northern China with an agreeable investment environment. Dalian is the focus of foreign investment, and full of commercial opportunities. In 2003 Dalian introduced 118 projects with more than one million US dollars investment volume respectively. The total volume of actual utilized foreign capital was 22.11 billion US dollars and the self-operated foreign exchange earnings reached 82.9 billion US dollars.

Dalian is an open city and a city with great vitality in northern China. Its urban functions are comprehensive and coordinately developed; its well developed social welfare system and apple-pie social order facilitate a happy and enjoyable life for the people of Dalian. Its telecommunication industry is well developed and its digitalized port takes the lead in China. Dalian has an agreeable environment and is full of commercial capabilities. Dalian has set the strategic goal of building a Greater Dalian, giving top priority to the development industry, revitalizing Liaoning’s old industrial base, and start the grand construction of ‘One Center and Four Bases’, a major business park. Dalian is striving to realize agricultural modernization, improving an overall third industry and urban integrated functions, promoting the fast coordinated development of economy and society, and significantly increasing the income of the local people. The future of Dalian will definitely be even brighter.

The people of Dalian are friendly and hospitable. They warmly heartedly welcome friends from China and from abroad to Dalian to share the great joy of Dalian’s rapid development into a world class city.